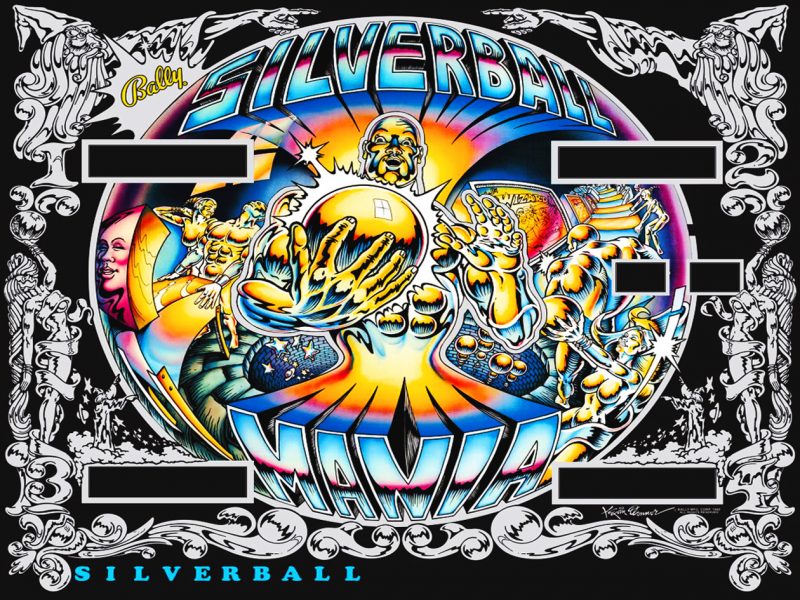 Mike Remembers: The first time I saw this machine was at the short lived futuristic multi-levelled Arcade on the East side of Bank Street just North of the Wizard Arcade. This was a fave weekend hangout with the Fat Albert’s Pizza shop right there for a quick break from buying quarters to feed to the machines lining Bank and Rideau, the two Main Streets in Downtown Ottawa, when just a little over 10,000 copies of Silverball Mania were rolling off the presses back in the USA at the Bally production headquarters in Chicago.

No drop targets, but more stand up and rollover targets than you can imagine. One for each letter of S-I-L-V-E-R-B-A-L-L-M-A-N-I-A.

It had advanced sounds at the time as well, similar to Space Invaders Pinball, which came out two months later. Aside from the sounds, they also shared the same center horseshoe feature, as well as the arrangement of 3 pop bumpers stacked Chessboard style with 4 dead bumpers that score but do not “Pop” to repel the ball.

Of course the incredible use of Mirror finish in the background art with the fantasy liquid mercury Silverball Maniacs in a Cosmic Fusion with the liquid mercury Pinball Machines are one of the most iconic and stunning visuals of the medium in that late Golden Era period just before translites and generic cabinet art would start adorning Pinball Machines two years later.

Write your own memories of this game in the comments below ↷